I was never tech savvy. But in summer 2016 I found myself managing a graduate project to develop 3D animated shorts. Sure, I thought, this sounds fun. Let’s make the animations in virtual reality, someone said. Why not. And let’s use sensor technology to trigger the VR 3D animations as the viewer walks through a stage set. Are you crazy? Okay, the last one was my idea. But our team of five M.Sc. Interactive Digital Media students did all this – and in twelve weeks. 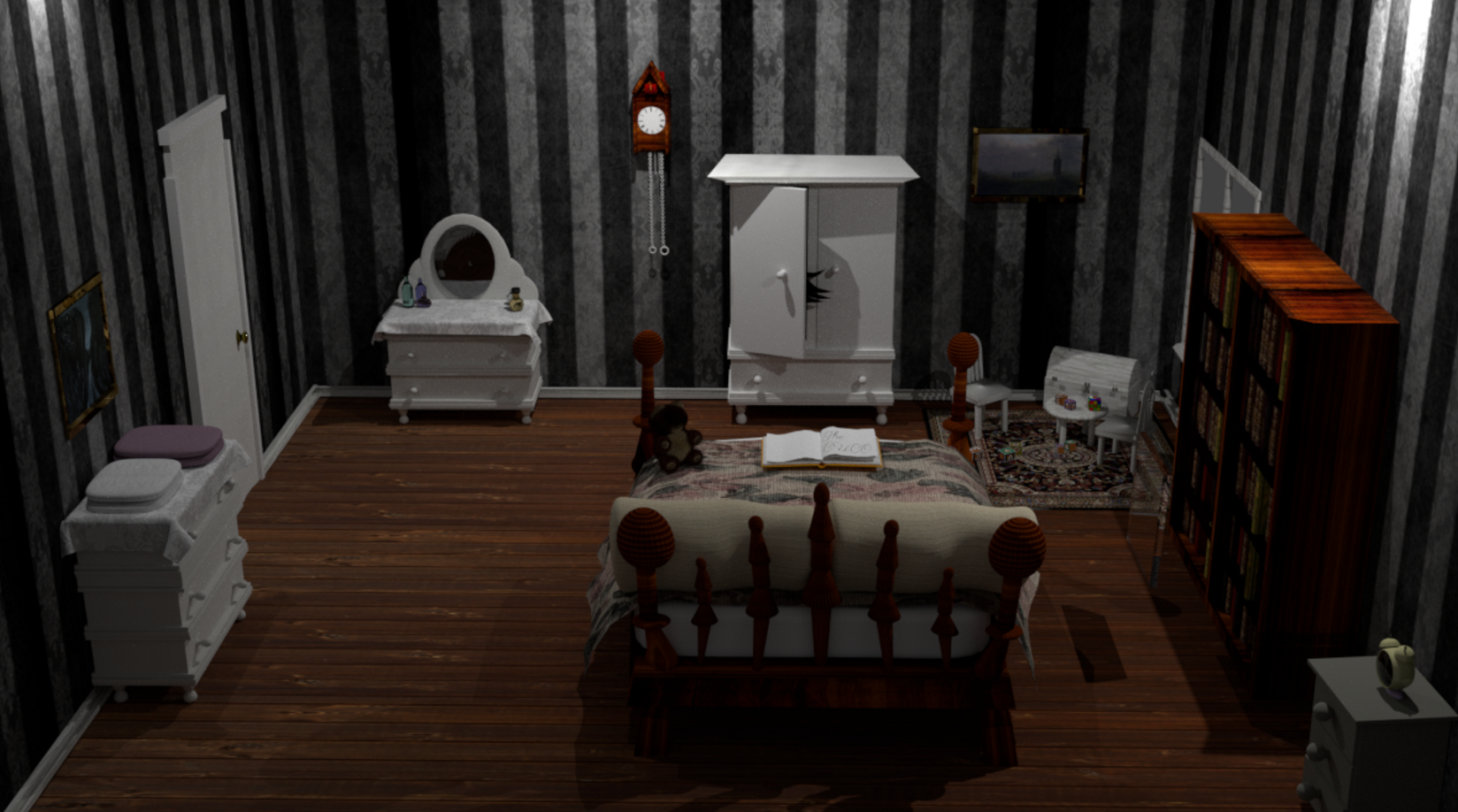 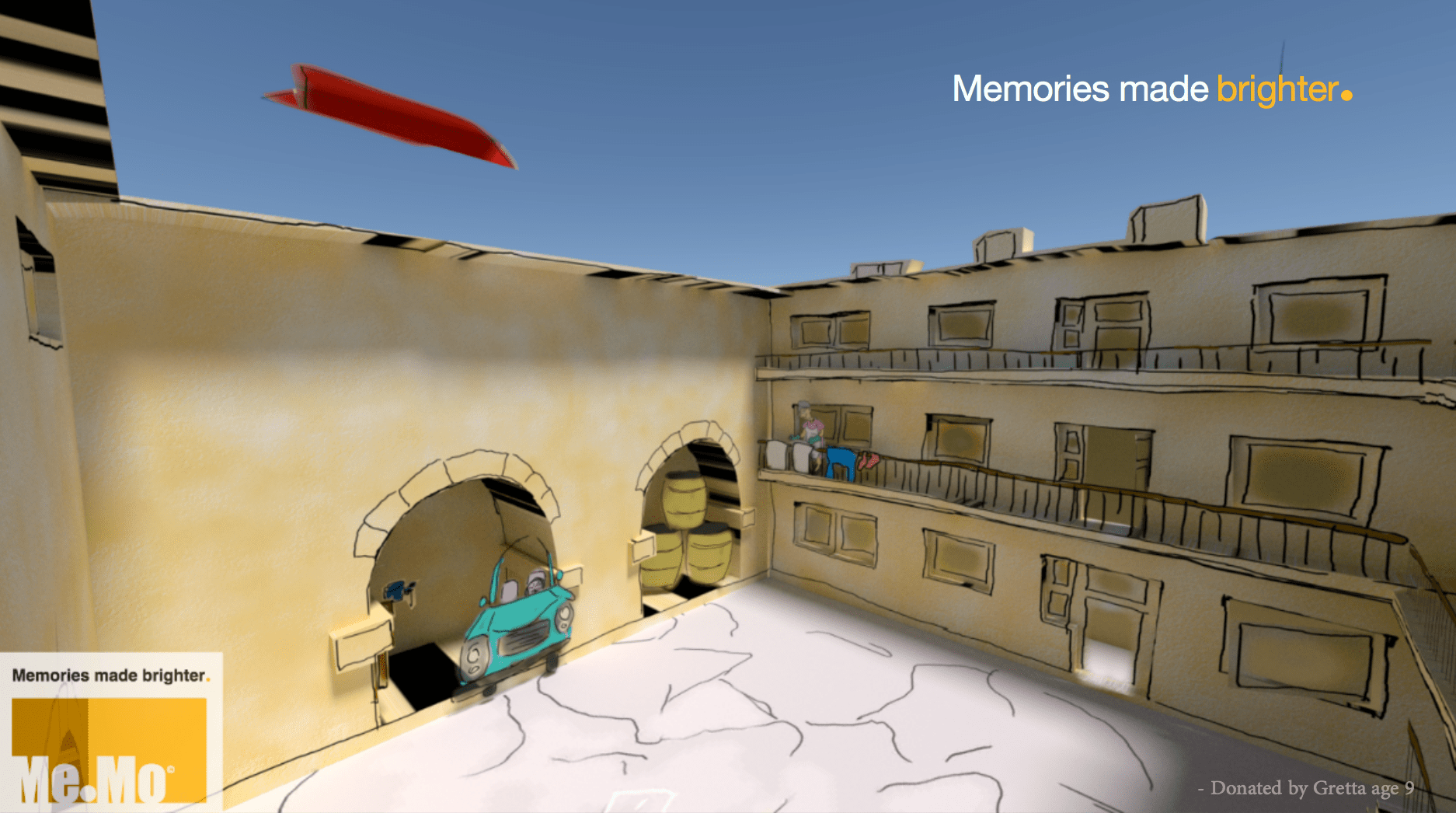 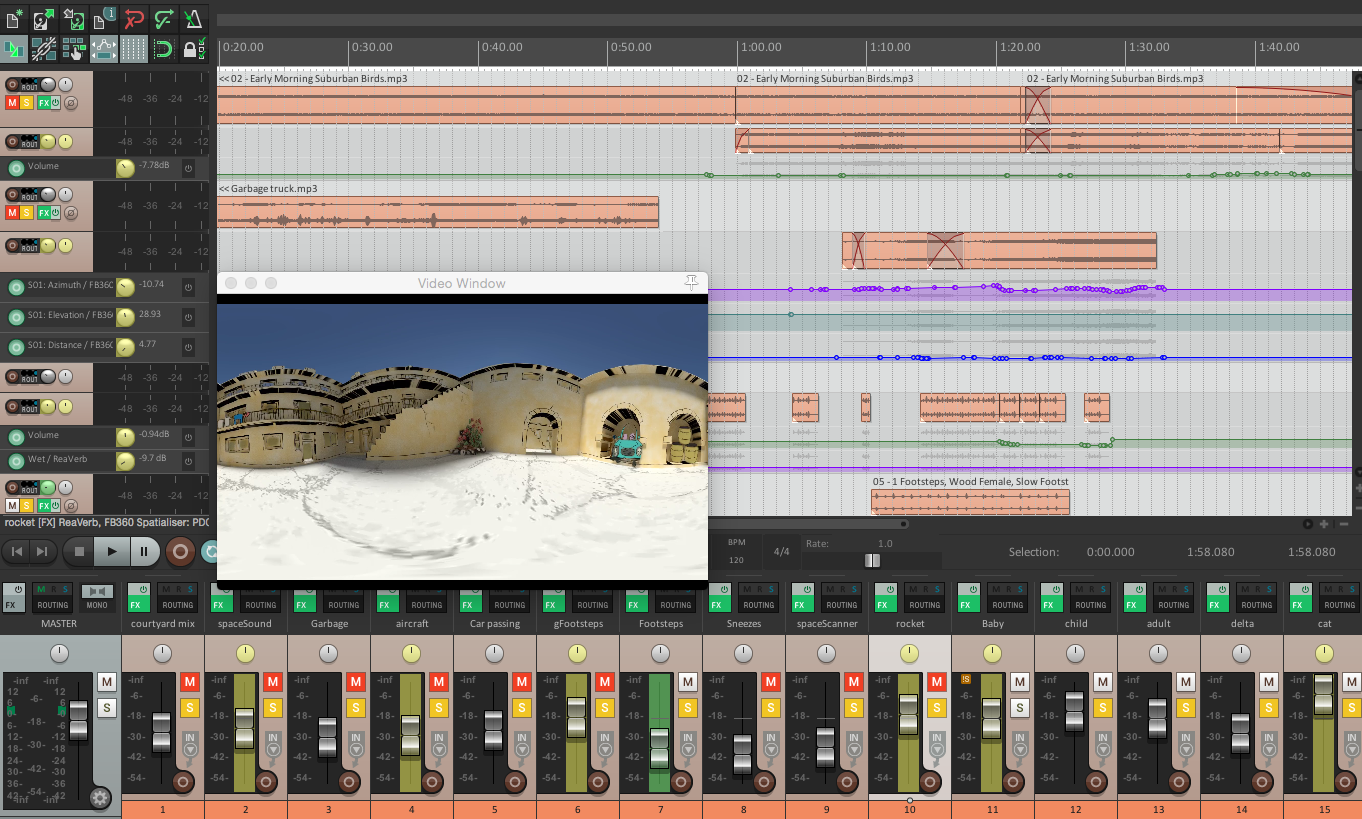 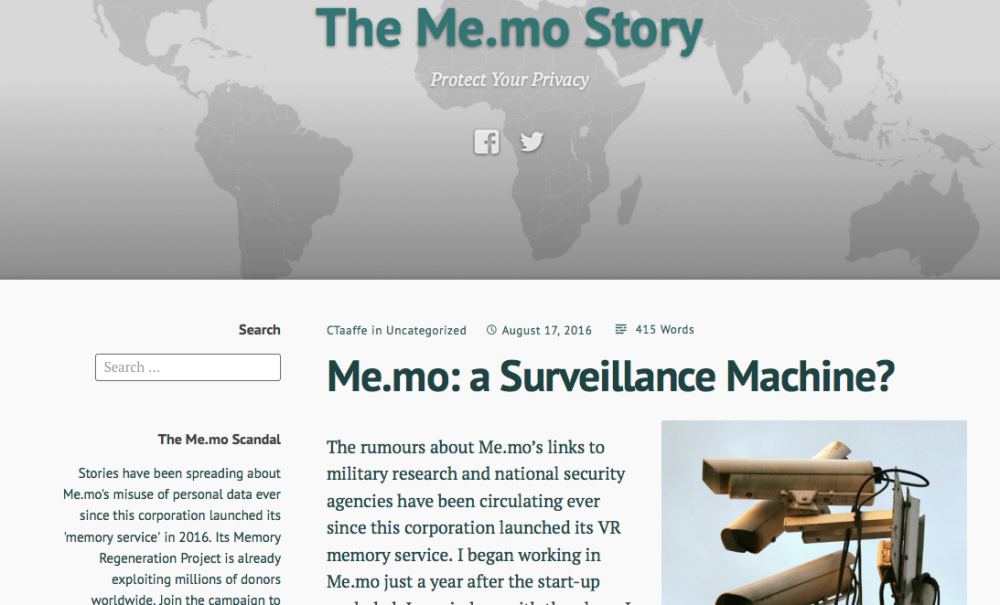 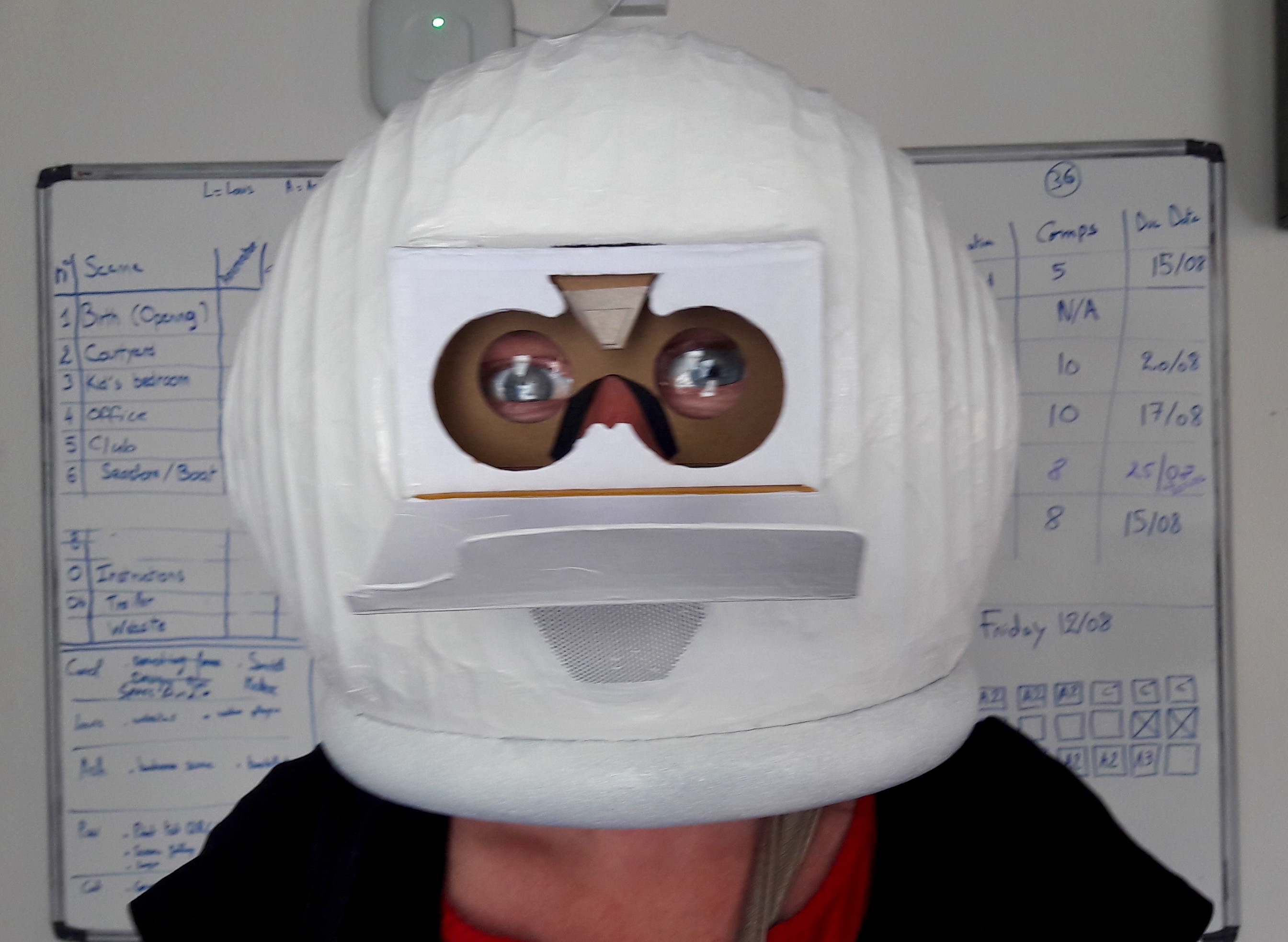 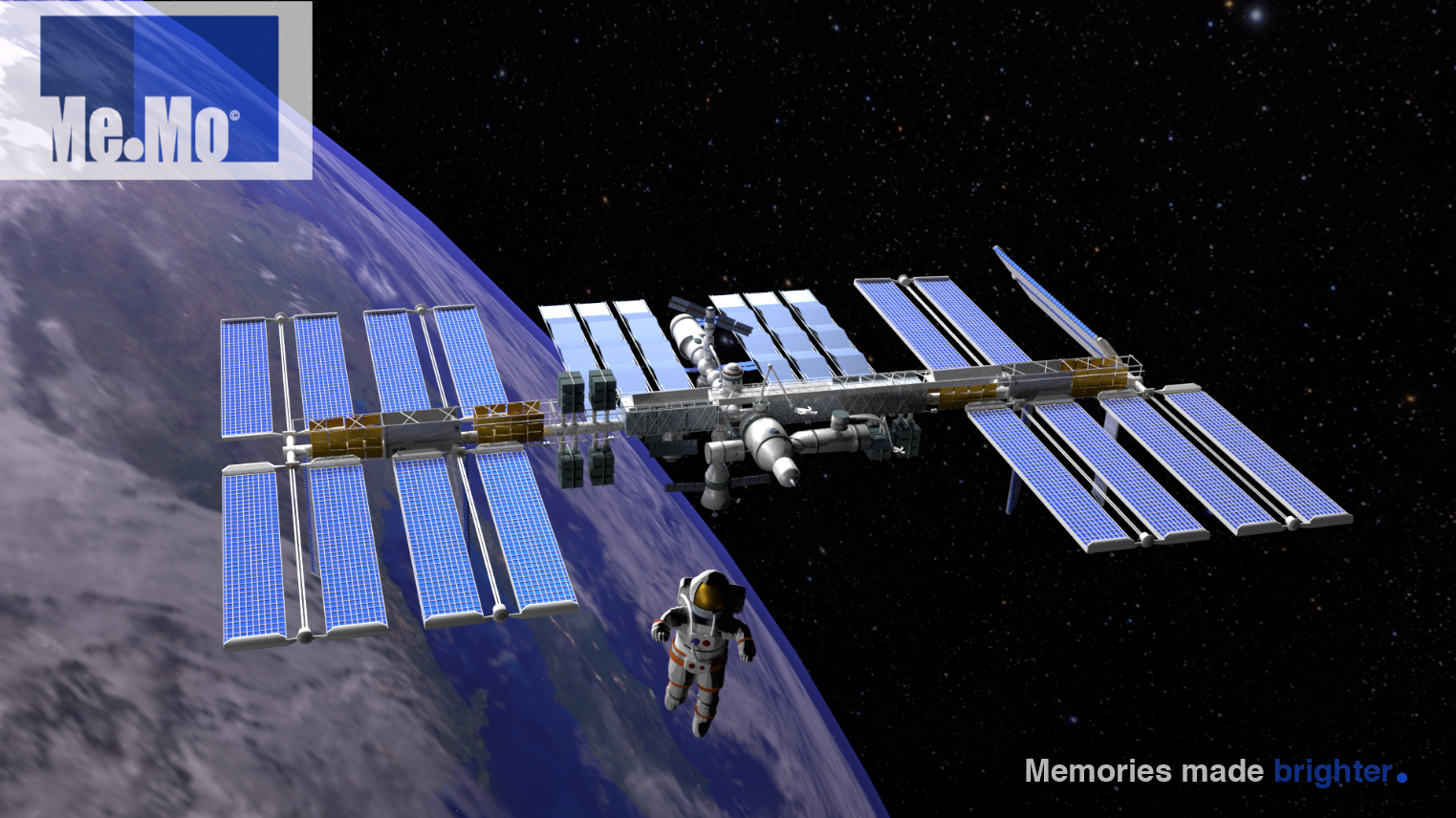 As it developed, the project became an experiment in multi-platform storytelling. Three animators created six independent VR scenes. The scenes would be triggered as the viewer moved around a physical set. But we didn’t know in what sequence the viewer would encounter these scenes. After all, the visitor’s journey around the set would be unpredictable. So we had a story problem. The original concept had been conceived to show off technical skills: 3D animation, designing for virtual reality, spatial audio editing, and sensor technologies. Our idea was entirely tech-led. Now we had to give our films meaning, while creating a story that fully exploited the technology we had chosen to use.

The solution was Me.Mo. We invented a fictional corporation that used groundbreaking technology to harvest memories and re-create them as virtual reality experiences. Our graduate showcase in Science Gallery Dublin would double as a Me.Mo corporate expo. And for this exhibit, we created a physical Memory Palace. We put six objects on display, each with a QR code attached – a gramophone, a book of fairytales, a globe, and more – and each of these objects was a memory trigger for a story. Seeing the globe through a VR headset, for example, would trigger an animation set in outer space, with 360 spatial audio.

These short films were presented as memories re-created by Me.Mo’s artists. The promotional material we produced explained how ‘memory regeneration’ worked. But those who visited the Me.Mo website and social media would gain an extra insight into its activities. On social media, protestors were raising questions about data harvesting and privacy issues.

The way in which our fictional corporation worked is pretty common in the age of ‘surveillance capitalism’. Me.Mo operated like a Google or a Facebook: it gave its services in exchange for data, and more data. It promised ‘memories made brighter’ – a carefully curated simulacrum of a life. But what was it doing with all this information? Was this being used for surveillance, or for research conducted without consent? Either way, is it wise to freely share personal data for corporate profit?

In the end we had created a story of nested narratives, which meant the exhibit worked on different levels. The VR experience was a huge draw for visitors: children loved the childhood memories rendered in a playful 2D cartoon style; adults preferred the high-octane club scene or the experience of floating in outer space. While waiting for VR headsets to become free, others could explore the Me.Mo story on our website and social media. This was a story world that worked on multiple platforms, and at different levels of visitor engagement.